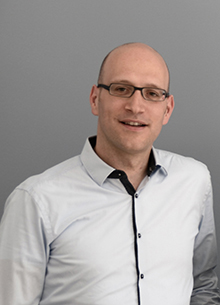 Holger Hoffmann is a registered architect (AKNW: 100445) based in Düsseldorf, Germany. In addition to his activities as a practicing architect he holds a professorship for ‚Techniques of Representation and Design‘ at the University of Wuppertal. From 2007-2011 he has led the department for digital design at the University of Applied Sciences in Trier, Germany.
Prior to this Holger worked with UNStudio, Amsterdam, from 2002 until 2008. Here he has been responsible for the design and execution of projects worldwide, among which the Lelystad Theatre, The Netherlands, Five Franklin Place Apartments, New York, and Ardmore Residences in Singapore. Previously Holger collaborated with UNStudio/United Architects, New York, on the competition entry for the World Trade Center site in 2002, and with Bolles+Wilson, Münster, on several projects and competitions in 2000/2001.

He received a postgraduate architecture diploma with distinction (SAC hons.) in 2004 from Staatliche Hochschule der Bildenden Künste, Städelschule, Frankfurt. Furthermore he holds a professional degree in architecture Dipl.-Ing.(FH) from Münster School of Architecture, Germany. Before studying architecture he has spend two years as a mason apprentice.

Holger was awarded with the Konrad Adenauer Stiftung-scholarship (2002-2004) and the Taut Preis 2005 of the German Architects Chamber, Berlin. Since 2013 he is a member of Bund Deutscher Architekten (BDA)“.